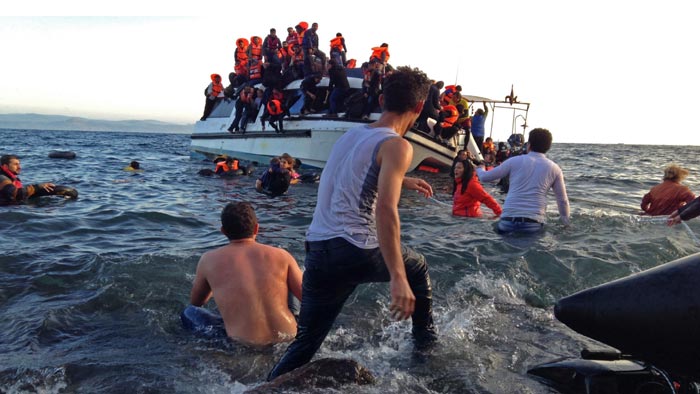 LifeStyleTV reports from one of the Greek beaches on Lesbos, where the refugees arrive to Europe, and from the first part of their journey through Macedonia and Serbia. We interview both volunteers and refugees. The focus will be on how ordinary people have acted with heartfelt compassion to this crisis.

”An experience I will never forget!”

Visiting the Greek island of Lesbos for a TV-production on how volunteers are helping the refugees, was an experience that I was not ready for, and one that has changed my life forever. To see the horror-stricken faces of the children, mixed with the joy and exhaustion of their parents as they arrived soaking wet and freezing from the boats after crossing a turbulent sea, will always remain in my memory. But to see the tireless efforts of volunteers working on the beach in shifts around the clock, people from around the world who just felt that they had to do something to help —that gives me hope for the future. There were few dull moments in the Adventist Help medical first-aid bus, with many patients being seen every day, more than 1,600 since the team arrived on the island just over a month ago. The team is wonderful in the way they take care of each other, for what they experience, no one should have to experience — because no refugee should ever have to flee this way, and be forced to risk their life at sea to find peace and a new life. The battle between life and death is very real here. One moment the doctors are comforting bereaved parents who have lost their child in the waves, the next moment they may experience the joy of successfully resuscitating a blue, almost lifeless baby on the beach. In the midst of all this suffering, answers are not easy to come by, but a loving embrace works wonders.

After the attacks in Paris, one of the doctors on the bus, Michael-John Von Hörsten, expressed it this way, “These are refugees. Not violent jihadists. Not economic migrants. They’re here to find refuge from a lifetime of Friday nights in Paris.” While this is probably true for most of those they meet, it is thought-provoking to realize that some of the terrorists who indiscriminately killed people in the Paris attacks, seemingly came via one of the Greek islands off the coast of Turkey.

One of the volunteers helping at the first-aid bus shared that two of his best friends were killed in the Paris attacks. “However,” he said, “on the beach they are all human beings, in desperate need of help.” That one can keep serving in this situation with love, instead of hatred, is to me a miracle of divine love. A love so strong that it can change hearts. Showing this unconditional love on the beach may be our best shield against future terrorist attacks. On the way home after a week on the island, one of the volunteers wrote: “Today we had a Jewish female doctor from Israel on the bus, providing medical care and warm, dry clothing to a Syrian woman. This scene greatly affected a Greek pediatrician working with us, and he was moved to tears as he expressed that it gave him hope for humanity.”

How to handle the continually growing numbers of refugees in Europe is an overwhelming political challenge that each country must wrestle with. But when I stand on the beach of Lesbos and see another boat pop out of the waves, overloaded with screaming and terrified refugees, there is only one thing to do — help them safely to shore and get them some warm, dry clothes and something hot to drink. It is easy to sit at home and form an opinion by what we see and hear on the news, but let us not forget that whatever their motives for coming to Europe, these are people. And whatever decision each country makes in how to handle this crisis, let us treat these people with respect. As for me, I will never see this crisis the same after my visit to Lesbos. I wish that more people would take the opportunity to help, whether it be locally or at a flashpoint in Europe — it will be an experience you will never forget!

Claus Nybo is also leader of LifeStyleTV and enjoys being out in nature.