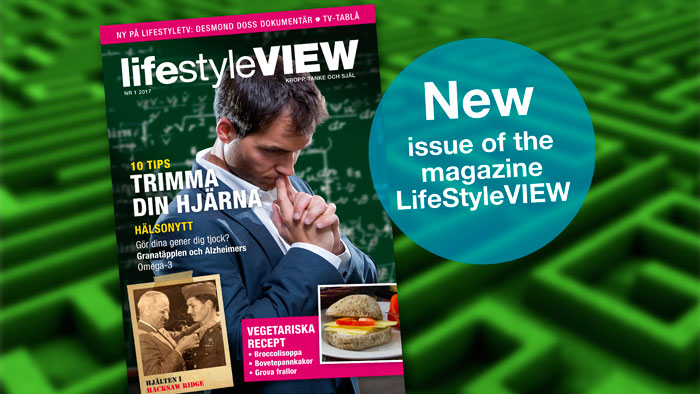 Finally the new issue of the magazine LifeStyleVIEW has arrived! To give you a taste of the content you can read the editorial written by Claus Nybo. Enjoy! At the start of a new year, we often take time to reflect on the past year. We dream about what we can do better, and set goals for the new year. We stand with a new opportunity to make choices that have the potential to change our life. Many of these choices can have an impact on our health – for better or for worse. It is important to make smart and informed choices to have a healthy and happy life.

What have become known as the Blue Zones, are areas of the world where people live significantly longer, healthier lives. Thanks to Dan Buettner’s bestselling book, The Blue Zones, and National Geographic’s article with the same title, many have heard about these pockets of long-living people. One of these pockets is found in Loma Linda, California, USA. They are not just a demographic group of people, but a faith community, the Seventh-day Adventists, who on average live up to 11 years longer than the population around them. Their healthy lifestyle has been the subject of much research for many years. In 2017, we are partnering with the Seventh-day Adventist church here in Sweden in a new campaign, Frisk & Smart, which will explore the secrets of longevity and happiness. In LifeStyleVIEW, we will bring you special articles throughout the year which are connected with Frisk och Smart – in the hope that this will help you make smarter choices!

The Hollywood movie Hacksaw Ridge made many headlines last year, and confronted us with an extreme example of making choices. Even though the reviews in Scandinavia have been mixed, it has still been a popular movie. The whole film depicts the true story of Desmond Doss and his heroic acts during the close of the second world war. While his heroic acts are admired, few seem able to comprehend and appreciate his conscientious stand and the unselfish choices he made.

Does this reveal a troubling trend in our secular society? Are we unable to relate to matters of conscience, the very fabric that makes a nation great? Are we in the process of losing our sense of right and wrong? Are we, in our quest for selfish success and gain, willing to compromise principles to reach the top? The political arena often seems to reveal this human tendency, but what about in our personal lives? Do we ignore and excuse the wrong we see around us — in our own choices or in the action of a friend?

What was the one principle that helped shape Desmond’s life and led to his receiving the Presidential medal of honor? In the documentary, The Conscientious Objector, he explains it himself, “I knew that if I ever compromised just once, I would have problems. Because if you can compromise once, you can compromise again.” Read more on page 28.

Whether it is choices concerning lifestyle, or choices about moral issues – choices matter. So let’s learn how we can make more smart choices in 2017!